Simon Blow is the author of numerous books, DVDs and Audio CDs about the ancient Chinese healing arts. A near fatal accident at the age of nineteen lead Simon to investigate different methods of healing and rejuvenation a path he has followed ever since. He has been a full time professional teacher (Laoshi) since 1992; he has received training and certification from Traditional Hospitals and Daoist Monasteries in China and has been given authority to share these techniques. Simon has been initiated into Dragon Gate Daoism and given the name of Xin Si meaning Genuine Wisdom and is an initiated student and 29th Generation of the Da Yan Wild Goose Qigong. He also is a Standing Council Member and Deputy Secretary of The World Academic Society of Medical Qigong, Beijing China.

Simon was invited to teach at the Little Bay Coast Centre for Seniors in 2002 and has been leading regular classes ever since. He is a specialist teacher and has been working for over thirty years to help people find peace and improve their quality of life. Simon has been teaching stress reduction programs using Qigong methods at We Help Ourselves (WHOS) a drug and alcohol rehabilitation centre since 1992 and also for Mission Australia and the Salvation Army. He has been training health care professionals to incorporate traditional healing techniques for the Health Dept in NSW and QLD and has been leading groups at the new Chris O’Brien Lifehouse at RPA Hospital since its establishment in 2013. Simon conducts many retreats and workshops throughout Australia and has been leading unique study tours to China since 1999.

What is the difference between Taiji (Tai Chi) and Qigong?

This is a common question that I am often asked, and really we are describing different subcategories of the Chinese Healing Arts

Qigong (Chi Kung) is a relatively new term used since the early 1900s to describe the Qi (Chi) energy techniques used within the Chinese Healing Arts. Qi or Chi is a term meaning ‘life force energy’ this energy flows through the network of meridians in the body, the vital energy that permeates all life things. Gong or Kung translates as work, mastery or skill, literally, a way of working with the energy of life. The art of Qigong consists primarily of meditation, relaxation, physical movement, mind-body integration and breathing exercises. There are thousands of different styles and systems, either practised standing, moving, walking, sitting or lying.

These healing arts originated in China as a way of cultivating spiritual, physical and emotional health. Similarly, other cultures had holistic approaches to connect and harmonise with their local environment and their known universe. When we lose this connection it causes imbalance and we are not able to enjoy the experience of life to our fullest.

The origins of Qigong trace back to the Tangyao period of 4,000-5,000 years ago. Qigong was clearly outlined in the book Huangdi Neijing or The Yellow Emperor’s Internal Canon of Chinese Medicine which in 2,500 BC described the basic theory of Traditional Chinese Medicine and is still used today.

Medical books published from the Han Dynasty 200 BC show detailed theory and clinical practice of Qigong techniques for treating disease and improving health. Silk scrolls known as the Daoyin Diagrams, unearthed in 1972 at an archaeological dig in Changsha, China, show detailed illustrations of medical Qigong exercises and have been dated to 168 BC.

For thousands of years, millions of people have benefited from Qigong practice. From ancient to modern times, Qigong self-healing exercises have been used to help improve people’s quality of life. In Traditional Chinese Medicine, good health is a result of a free-flowing, well-balanced energy system. Ailments, both physical and emotional, occur when the flow of Qi is blocked or impeded, causing imbalance and dysfunction in the body’s energy system. With regular practice, Qigong helps to cleanse the body of toxins, restore energy, reduce stress and anxiety, and help individuals maintain a healthy and active life.

There are three main categories of Qigong: Martial, Medical and Spiritual.

Taiji (Tai Chi) is a Chinese term describing the Yin/Yang symbol. This symbol comprises two opposing forces that balance or complement each other. Without one the other would not exist. Yang energy is expressed in qualities such as up, external, male, hot and bright. Yin energy resides in the opposing characteristics down, internal, female, cold and dark. When we find balance, we understand and achieve Taiji.

The popular soft, internal martial art called Taijiquan (Tai Chi Chuan) is a relatively new style and has been developed over the last 600 years. A verbal translation of ‘Taijiquan’ would be ‘the interaction of Yin/Yang (Taiji) in creating the fist or boxing (Quan)’. There are many physical, emotional and energetic benefits to gain from practising Taijiquan forms, as well as self-defence applications. Taijiquan can be described as one of the martial forms of Qigong.

But a good way to differentiate between the two is to contrast the ways in which they are practised. Practising Taijiquan is similar to shadow boxing with an imaginary opponent – blocking, striking, using the opponent’s energy with yours to find balance (Taiji or Tai Chi) – whereas Medical and Spiritual Qigong there is no opponent the movements are practised purely to cultivate one’s own Qi, allowing it to connect with the Qi or energy of the universe.

Three levels of Qigong training
No 1. Practising the form or the shape of the movements
No 2. Practising the details, this includes specific breathing patterns, concentration and alignment of various energy points.
No 3. Practising the Qi (Chi) flow.

It doesn’t really matter which one of the Chinese Healing Arts that you choose to practise as they all work in cultivating and refining your Qi energy, helping to improve your quality of life 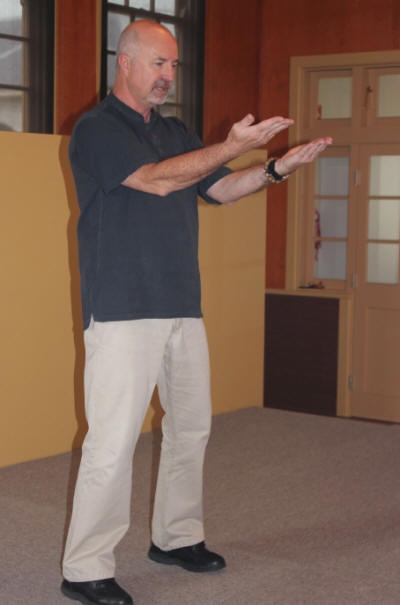